I was pretty excited when I saw an ad saying the wedding party movie was now on Netflix!

I was looking forward too watching it as the hype was major. Toyin tomato was in the movie and I love her!

So Liebhaber and I sat down for some laughs which we did get but I was disappointed with the movie. Sometimes it got so boring I wanted to scream. The movie according to a news agency has made a record 400 million naira which should be about 1.2 million euros. That’s huge for a nollywood movie!

The movie, while hilarious, had a lot of flops and ended up being like the regular Nollywood crap that gets released. The movie was supposed to change the game for the Nigerian movie industry but it didn’t do that. Nollywood is still where you and I left it.

Major spoilers here so if you haven’t seen the movie I suggest you stop reading! Lol! I always wanted to say that ha!

Trust me, you are missing nothing so go on and relax. Grab a large mug of cold Milo with chunky ice cubes and read on! OK maybe you will be missing all the laughs that I cannot describe as only you can experience by watching it for yourself!

So the movie began with an afro beat, a biker rolling around the streets with the invitation cards and the angles​ at which this was shown was very promising I swear! Plus you get to experience a bit of lasgidi sight seeing.

Tante Yemiscoco! Yep I had German subtitles while watching and it was hilarious with pidgin (I was wondering how they would translate it but they were spot on! Except it wasn’t as much fun in Deutsch as it is in pidgin!) Oyibo pepper was translated as vanilla essence! Imagine that ja?

Surprisingly our oyibo pepper acted quite well. The few Nollywood movies I’ve seen with Caucasian characters were always so badly done. These actors were so bad it hurt my eyes so I expected the same from her but she surprised me.

The next fun part for me was the scene with the bride’s mum and her friends. I’ve never attended a Yoruba wedding. I don’t speak Yoruba either(we will get to that part soon) but it is safe to say that this is a regular occurrence in a Nigerian home. The mother of the bride is usually more excited than the bride herself. Her best friends rejoice with her, they gossip about haters and dance to their music! It’s fun, it’s exciting, it is beautiful and I love it! Ah the day my daughter gets married I would probably do worse????.

So the movie had a lot of Yoruba spoken and it upset me because I don’t speak Yoruba so I had no idea what they were saying. It would have been great if they subtitled the yoruba that was spoken because there was a lot of yoruba. Luckily, it was translated in German which helped me understand a whole lot better! I have to say I was surprised they did translate. And it was cute! Imagine if I spoke no German and Yoruba at all! Thank God for Übersetzung! Most of the words I heard a lot while in Lagos,  I was finally able to know what they meant thanks to the German subtitles.  Ironic eh?

In comes RMD. That gorgeous gorgeous man!(insert Octavia Spencer uhm hmm!) As beautiful as he is on the outside, his acting skills have gone down more than a notch. He was the worst actor(amongst the main characters) in this movie and I couldn’t understand that. This is a man who I grew up watching on TV and always thought he was great! Yeah, maybe I just…Grew up! His expressions were perfectly done I have to say. I just didn’t feel like he acted brilliantly here. It felt like they just needed a powerful name and he was top of the list. I like that he attempted Igbo when in reality he isn’t. But that’s the character he was playing and I think it was great they made him speak Igbo. Most Nollywood movies don’t do that.

So was genau ist gbegiri? The Germans translated it as Bohnensuppe! I have never tried it or even heard of it(I lived in Lagos for a bit so how did I not try it? And then kpanlastew!

I know kpanla is a type of fish(don’t ask me what type I just know it’s fish!) Fischeintopf is the German translation! Brilliant oder? Hehe!

Then Rosie walks in. Her hair was so bad I was “mortified”! She has such beautiful skin tho! Dark chocolaty brown skin, glowing and smoking!! Her hair tho! I couldn’t stop fainting! It was horrible!

The movie was good in the sense that the story line was great and had a lot of morals we are supposed to take with us after watching it. But the whole execution was not different and by this I mean it didn’t change from the regular Nollywood movies that gets released and that wasn’t supposed to be the case abi?

The movie did touch on some traditional things like how the Yoruba culture is so colorful and fun. How extravagant owambes are and no one cares if the bank accounts cannot cover them because you gotta save face! When the bride’s family danced in, it was so heart warming. The smiles, the movements, the togetherness, the whole experience was just so beautiful. It makes you smile and want to just get off your sofa and join even though you have no idea what the songs mean! But that’s Yoruba tradition for you!

Or the part where the groom’s mum refused to get up in church and her friend did the same and that happens all the time! Friends sticking with friends even though it’s wrong! Or the angry ex who “mobilizes” her gang to come make a scene! Or when other tribes assume that the efik/ibibio culture is the same thing with the Igbo culture! Yup! That happens every time. Or the part where the father’s girlfriend comes in and he communicates with her on his mobile under the name small chops.

Yup, we don’t want the other half to detect our espionage skills with names like Titi or Adewale!

Anyways, my favorite scene was where Dierdre tried to get the attention of a waiter! This is so classic and every one who has been a guest at a wedding can attest to this!

Let’s not even go into how she listed all the stuff she wanted to eat!! Made me hungry listening even though I probably won’t eat all that. I’m not a fan of Yoruba food. I do however love fish stew though with red oil! The first time I made it I was in love.

The movie in general gave the public what they wanted and what the producer promised…laughs, romance and vibrant colors. The camera angles in the movie were great. It was star studded (I have no idea who the stars are except the regular ones I know but everyone gushed about all the famous faces in it!) and gave us an insight into what Nigerian weddings can be like from an outsider’s view.

It was a debut movie from a woman named Kemi Adetiba and you have to give her high scores for her attempt. A lot of seasoned directors in Nollywood don’t even level up to what she did on the first go. I like that she didn’t use the regular Nollywood names that are always in every gawd damn movie released.

Sola Sobowale who played the bride’s mum, was the biggest highlight of the movie. She was so original, her dramatic expressions and overall display of the perfect Nigerian mother! She nailed it. Oh sure she had some scenes where I go…oh dear but she still did good. Gawd I love her!

Sola, the best man was a bit too much for me. We could have done without his over excessive enthusiasm. Really.

The soundtrack is beautiful too(all hail Mr Flavor) and the ambiance of the movie was not bad at all.

Is the movie going to be remembered for a long time? I don’t know. It was funny and it was sort of realistic and didn’t try to copy Hollywood which is always the downfall of Nollywood. Would I watch it again? Gawd no! One time was enough. Second viewing was just to make a review. Would I recommend it to anyone? Yup. I would just warn you to not expect anything grand!

So yeah, go watch it on Netflix and have yourself some laughs. Just don’t expect that it would be different from regular Nollywood because it isn’t…Nollywood needs some serious divine intervention! 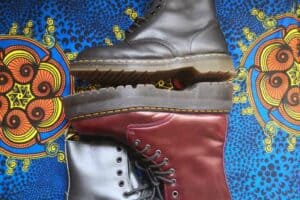 A License To Drive with Dr Martens 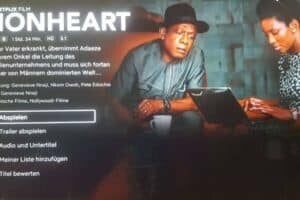